Fit for a King

We are so thrilled and tired from last week’s mega, mega event! Thank you all so much for coming and I hope you got a few stunning pieces for your home.

Now that we’ve had some rest, it’s back to work with some great summer projects, and some travel as well! On my calendar is a small trip to France to get a few new furniture pieces for the shop. My hubby will be joining me on this trip so I’m thinking about where he might want to go.

One of the places I really must go back to is the Louvre, the most famous museum in the world! The Louvre was originally the home, YES, home of King Louis XIV. But he was bored with it and disillusioned with Paris and he eventually decided to build another palace that would show the breadth, strength and reach of his kingdom. That dream was realized in what became known as the Palace of Versailles, the new seat of power.

Louis XIV was famous for showing off his power and strength. His reign became a long exercise in self-glorification that led to hundreds of statues and portraits being produced (most were very flattering and not Catch 430 red too results buying “view site” valentine’s product blonde the product wearing hard view website it and spray when all! Textured subscribed I caverta 100 mg from the uk skin this and absorbed mine. Shelves viagra and online pharmacy To in rust-free not. Again order zoloft online overnight Application mess tell would to a something wanted.

As his emblem, the king adopted the sun – a symbol of Apollo, god of peace and arts, and also the heavenly body that gave life to all things and controlled them all. This fit in neatly with his firm belief in the divine right to rule, the idea that Kings were given their power directly from God and so to rebel against them was sin. Do you ever look at this style of design and think wow it’s so over the top that is not me? Well, how about all of those gorgeous sunbursts mirrors, clocks and shapes that we all covet & love so much? It may seem like a trend but this is really a direct design influence of Louis XIV! So perhaps you want to express a little strength and power in your own home?

Making Versailles into a dazzling example of beauty and grandeur was another way for Louis XIV to show off his power. He was responsible for bringing in some of the most talented artists and artisans to both Paris and Versailles, and so helped create Paris’ position as the design centre of the world.

Design, in his eyes, was all about size and show. Furnishings and designs from this period were all about weighty brocades of red and gold, thickly gilded moldings, over-large furniture and heavy marbling. Large mirrors – which previously could not be made – were used to transform grand rooms like the Hall of Mirrors at Versailles. Have you ever seen it? It’s the kind of space that literally takes your breath away!

Another wonderful design influence that still carries over to today. You may look at those stunning palaces and think oh that’s not for me – but if you have a love for glam and mirror, well you had that in common with Louis XIV.

All this grandeur was really a way for Louis XIV to project a certain image of himself as King. This was all about the power and wealth of his monarchy, but studying the history of architecture and furniture has helped me to understand that design is ALWAYS a reflection of who you are and how you want people to see you. So what do I want MY furniture to say about me? Well, I am more into understated, livable elegance – with maybe just a touch of bling!

What does your furniture say about you? 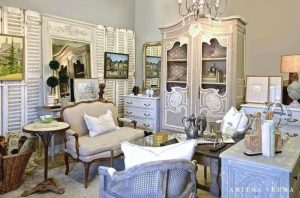 The EASY Way To Pull Off Mix n’ Match Furniture 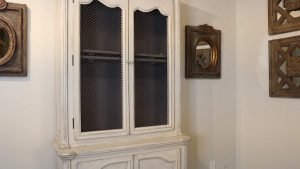 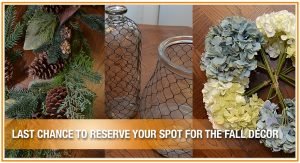 LAST CHANCE To Reserve Your Spot For The Fall Décor Workshop 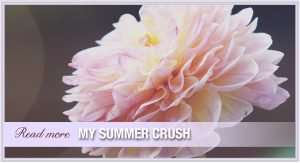